Now there are many render farms showing their price per GHz hour or Core hour for CPU pricing. This cost calculation is confusing for a first-time user. Due to the various generations of hardware, online render farms try to find a common calculator namely GHzh for CPU Rendering Benchmark. However, there seemed to be ambiguous for users on how to charge the rendering service.

However, some render farms make users confused when offering a different price between by GHz hour and by node/hour. Let’s talk about Super Renders Farm.

The aforementioned example that we take is from the CPU pricing of Super Renders Farm. The price per GHz hour is $0.004 for a CPU server including 2x Intel XEON E5-2670 v2. We calculate together that the price, when converted to per node/hour, is $0.2/node/hour. While the price per node/hour that Super Renders Farm offers on their website is $0.6/node/hour, which makes customers quite confused.

Some render farms that apply the cost calculation by Ghzh and OBh are RebusFarm, GarageFarm, RanchComputing, etc. The common point of these render farms is they offer the SaaS model.

OctaneBench is currently the most popular GPU Rendering Benchmark created by Otoy as a tool to define the general compute power afforded by any combination of graphics cards in a computer. The score is calculated from the measured speed (Ms/s or mega samples per second), relative to the speed Otoy measured for a GTX 980. The ratio is weighted by the approximate usage of the various kernels and then added up. If your score (or Octanebench score) is under 100, your GPU is slower than the GTX 980 we used as a reference, and if it’s more your GPU is faster. Here’s the list of GPUs and their Octancebench score created by Otoy.

Some render farms that apply the cost calculation by Ghzh and OBh are RebusFarm, GarageFarm, RanchComputing, etc. The common point of these render farms is they offer the SaaS model.

From my point of view, the cost calculation by GHz hour or OB hour is not the good one. Users often find it hard to understand how the render farm pricing works and render farms find it hard to estimate the rendering cost. According to Render Street, the definition can be ambiguous or misleading. Let’s take a depth look into this subject:

In addition, the majority of current render farms are based on the SaaS model (Software-as-a-Service). So the cost calculation by Ghzh or OBh is much vague for users. It is because users do not know which specific hardware that a render farm is offering or how many nodes are being used under their system. In themselves, the Ghzh and OBh are not very informative, since users have no basis of comparison. Therefore, it’s hard to compare the pricing and render time among SaaS-based render farms, and users cannot find which one is the best offer for them. 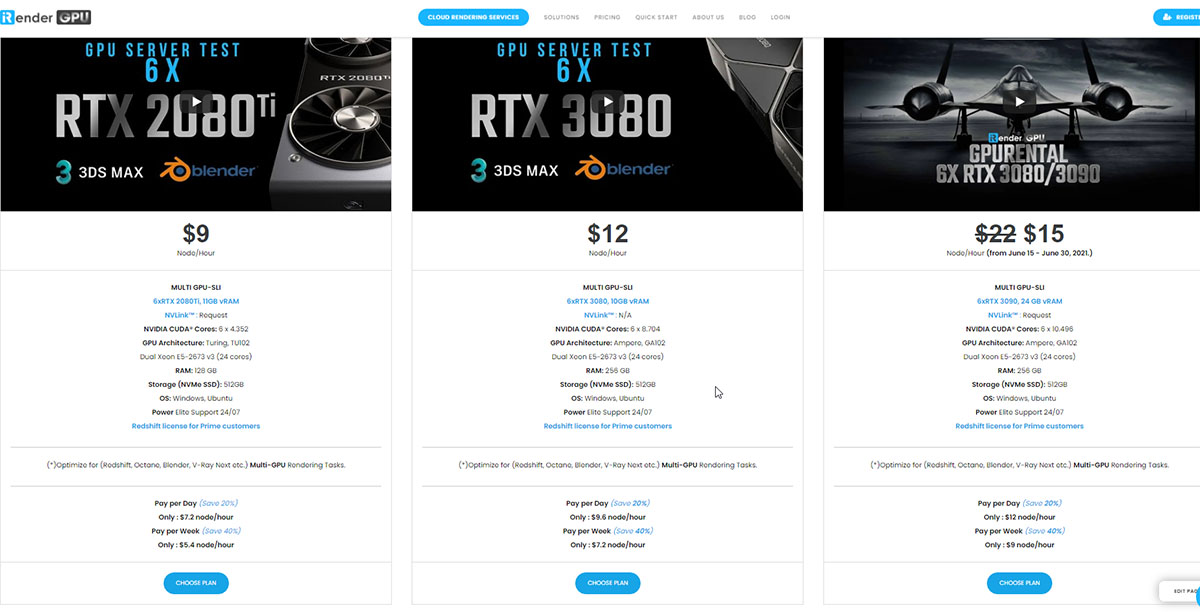 The render farm price per Ghzh or OBh is only an estimation way. The reasonable way to compare prices and render time among render farms for a given project is to check the benchmark on your own and compare the prices based on render nodes/servers. It means that some render farms such as iRender or AWS ec2, etc., when offering the IaaS model (Infrastructure-as-a-Service), transfer the control right to users, so users can get access to the remote servers and check whether the machine specs are exactly as what the render farm said or not, as well as benchmark the server hardware. This way is totally transparent and clear for customers while using render farm service.

What looks to be the better price isn’t always so. You may get more rendering per buck from a farm that seems to be more expensive, but in fact, gives you more performance for the same amount. And that’s strictly in terms of hardware. It can be said that the most transparent way to calculate render farm pricing is per node per hour, and users can check exactly the offered machine specs.