As far as I’m concerned, different render engines support different hardware. Therefore, a robust machine with a compatible CPU and GPU is necessary for each render engine. Some render engines are based on Real-time rendering, and some are based on Offline rendering. The key difference between an “Offline” renderer and a “Real-Time” one is the available time you have for a frame to finish.

In fact, real-time render engines are supposed to display a smooth frame result in real-time, so a frame should finish in below ~20ms for a Framerate of 50FPS. It can be said that most real-time engines are very similar to game engines. Both Engines will use rendering features that are easier to calculate and take much less time. When using Real-time technology, the results are rendered counting in seconds, and the frame quality and complexity of the rendering process can be lower than that of traditional rendering. Many users thought that a powerful GPU is not needed, however, the more robust GPU with numerous cores, the faster time it takes to render when the GPU has to capable of rendering more than 50 frames per second (cgdirector.com).

Now, there are some well-known and widely used real-time render engines in the community that take advantage of a single GPU. For the business philosophy of some brand names such as Lumion or Enscape, the company orientations are mainly focusing on individual customers. They are aware that the percentage of individual customers namely freelancers, small 3D & architect companies, and students make up the large majority of the market, with over 70% of users. Render engines have been developed to serve the majority for faster rendering, single-GPU render engines were born to solve the timing issue at an affordable price. 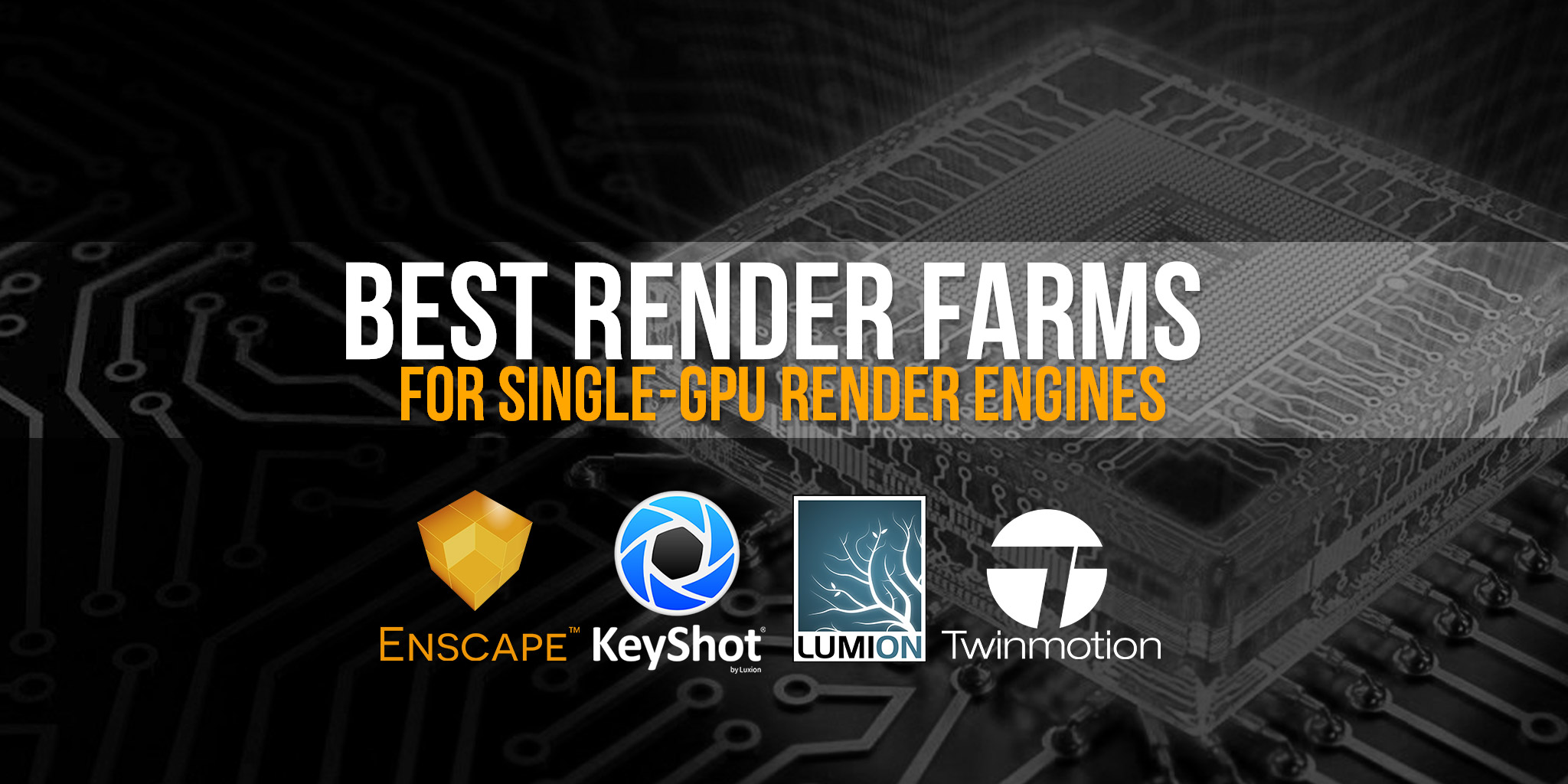 Lumion is 3D rendering software tailored especially for architects, designers. It is a powerful and effective architectural visualization tool to build a 3D environment and then create amazing images, impressive videos, and so on. Lumion enables real-time synchronization (simultaneous modeling and rendering; synced camera views and materials) with Revit, ArchiCAD, SketchUp, and Rhino.

Lumion, applying real-time technology, supports single-GPU rendering. Lumion needs a dedicated graphics card with as many PassMark points as possible. The computer requirements of Lumion as the following:

Using and building a project on Lumion is not difficult, however, rendering is an acute problem on this software. It needs more power of cores, memories, and a compatible CPU. Utilizing a render farm to speed up rendering time at a reasonable price is an optimal solution for individuals.

Twinmotion is a real-time visualization tool that empowers you to quickly and easily produce high-quality images, panoramas, and standard or 360° VR videos from design data. It’s been specifically designed for architecture, construction, urban planning, and landscaping professionals. Twinmotion is designed to simplify the process of creating stills, animation, and immersive media from your existing CAD models. Twinmotion is suitable for individuals who would like to create stunning visualizations. Whether you’re a professional working in a commercial environment, a hobbyist working on a personal project, or a student or educator.

Similar to Lumion, Twinmotion takes advantage of the real-time technology in rendering and now supports only a single-GPU type. The specification requirements for Twinmotion as following:

When it comes to Small to average projects (<1 GB geometry data) but not suitable for VR/4K video rendering/360 panoramic videos, users including freelancers or students are able to render the project on their local computer. Regarding large projects, real-time 3D presentation, video generation in any resolution up to 8K, 360 panoramic videos, VR presentation, all image formats, your local computer may not meet the rendering demand. It’s time for you to move to cloud rendering services that provide higher CPU & GPU and optimize your rendering time.

Enscape is a commercial real-time rendering and virtual reality plugin which is mainly used in the architecture, engineering, and construction fields. It is an easy-to-use real-time rendering & Virtual Reality Extension for SketchUp Pro, Rhinoceros, Revit ArchiCAD, and Vectorworks. According to Archdaily, companies from 150 countries and 85% of the internationally renowned TOP100 architectural firms use Enscape to improve their design process. With fast rendering times, ease of use, and an affordable price tag, it is a powerful tool for daily workflows.

Based on a real-time rendering tool, Enscape performs its renders using your graphics card (GPU), but the graphics card has to have dedicated VRAM, and not shared VRAM as found with Intel Integrated Graphics chips. If your CPU and RAM are capable of handling Revit, for instance, and you have a capable GPU, Enscape should work. A good CPU can speed up Enscape’s loading times. The system requirements to run Enscape as the following:

Enscape uses ray tracing for its real-time rendering, and almost all the calculations that Enscape performs are being handled on the graphics card. Therefore, the more RT cores, the faster rendering time is. Investing in a GPU with many RT cores is quite pricey for individuals, they should think of a render farm that supports rendering via a single but powerful GPU at an attractive price. In spite of its widely growing usage, a lot of  Enscape users find it really hard to find a Cloud Render farm that supports this plugin.

KeyShot is a realtime ray-tracing and global illumination program used to create 3D renderings, animations, and interactive visuals. In the past, Luxion only supported CPU rendering, but in 2018, this all changed when NVIDIA introduced the RTX architecture with dedicated ray-tracing hardware. As a result, Luxion decided to fully support GPU rendering, and Keyshot 9 was released at the end of 2019. KeyShot 9 introduces the ability to harness the full GPU-accelerated ray-tracing power of NVIDIA RTX with OptiX.

GPU rendering in KeyShot is a feature available for both real-time rendering and local render output. It allows one-click GPU render mode to take advantage of multi-GPU performance scaling and the dedicated ray tracing acceleration hardware in NVIDIA RTX-capable GPUs. Once the data is uploaded and shaders are compiled, the workflow is very smooth and fast. One of the challenges with GPUs is running out of memory. Very complex scenes with a lot of geometry and textures may not fit on the GPU, which leaves the CPU as the only choice. But now, NVLink launches, which solve the problem in terms of limited memory for GPU. The amount of memory can double from 24GB VRam to 48GB VRam, RTX 3090 for instance.

GPU raytracing in KeyShot 9 supports NVIDIA GPUs built on Maxwell microarchitecture and supports CUDA Compute Capability 5.0 or later found in the Quadro M6000 or GTX 980 and above.

Graphics cards on the NVIDIA RTX  platform with a minimum of 8 GB memory.

Driver Version: For both KeyShot GPU on both Quadro and GeForce, Luxion recommends version 441.66

Amazon Web Services (AWS) is the world’s most comprehensive and broadly adopted cloud platform of Amazon providing on-demand cloud computing platforms and APIs to individuals, companies, and governments, on a metered pay-as-you-go basis. Amazon EC2 offers customers the broadest and deepest compute platform with various options of processor, storage, networking, operating system, and purchase model. It is an advantage render farms for single-GPU.  It can be considered as Iaas (Infrastructure as a Service) when you can take control of a remote server via an RDP file. AWS supports an extraordinary diversity of GPU cards coming from Nvidia. You also have access to GPU instances, which allow you to use GPU renderers like Enscape or Keyshot. But you need to add your own license to any server you access. The G3 instance type is recommended for rendering, and they feature NVIDIA ® Tesla M60 GPUs, each with 2048 CUDA ® cores and 8 GB of GPU memory, a minimum of required memory.

However, the interface of AWS is quite complicated and users have difficult access to the server. Experts and people who know more about technical parts should choose AWS for their projects. You need to figure it out on your own to make a decision on which instances can be suitable for you and your projects. The support from AWS is rather hard to approach and the staff will not respond directly when you have issues or need help.

iRender farm is a leading render farm as an IaaS (Infrastructure-as-a-Service) model.  It is one of the best render farms for Single-GPU with powerful hardware. They specialize in providing high-performance machines for rendering. You just need to get access to their powerful machine via an RDP file, take full control of the server and use it as your personal computer. There are some points that make iRender unique, namely 24/7 available service, free transfer file tool with unlimited storage; storing images to be available for the next usage, or cloning function. Users can install and use any version of Lumion, Enscape, Keyshot, or Twinmotion on the remote server. iRender servers meet all Lumion requirements, even the high-end ones because each server is equipped with cutting-edge GPU RTX 3080/3090. Please take a look at the GPU rental servers that iRender offers in the following image:

In addition, iRender farm also supports NVLink which hardly render farms provide. NVLink can solve most problems in terms of the limited memory that Keyshot requires. iRender is suitable for single-GPU render engines at all project sizes because they provide RTX series 2080Ti, 3080, 3090 at the most reasonable prices starting from only 2$/node/hour. 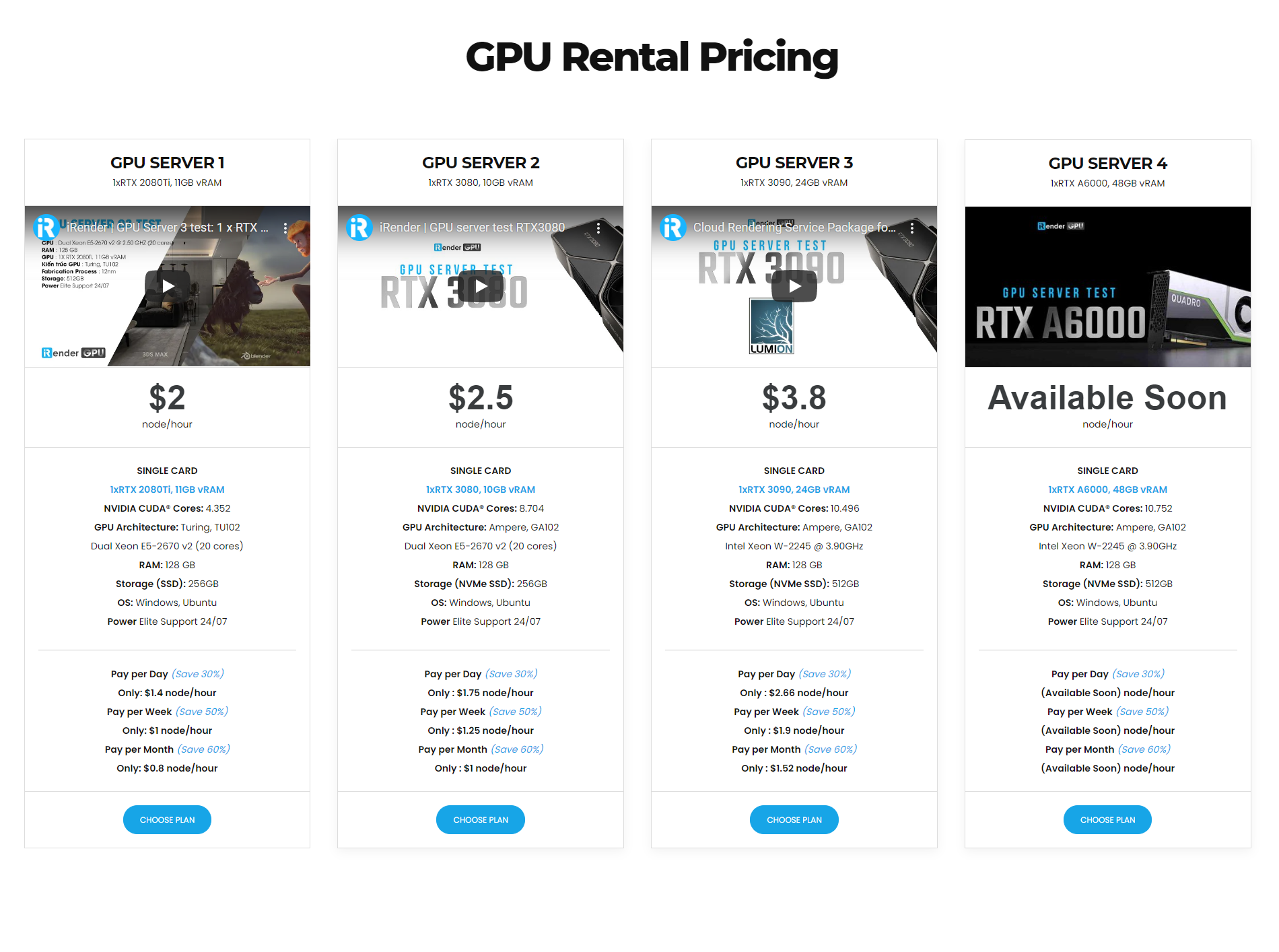 Our last best render farms for single-GPU on the list is Shadow. Shadow provides desktop environments for rent and uses a fast low-latency streaming technology. Shadow is a cloud-based computing service. It is the only remote service that offers performance capable of competing with a local PC. They provide servers with a single GPU on each. Pricing is the most attractive factor that we look at Shadow when they mainly offer GTX 1080 at the lowest price, only 11.99$/month. However, the parameters are only suitable for small projects, with a maximum of 12GB memory, 4 cores.

According to Lumion’s suggestions, it is not possible to use Shadow’s services immediately, there is currently a waiting list. 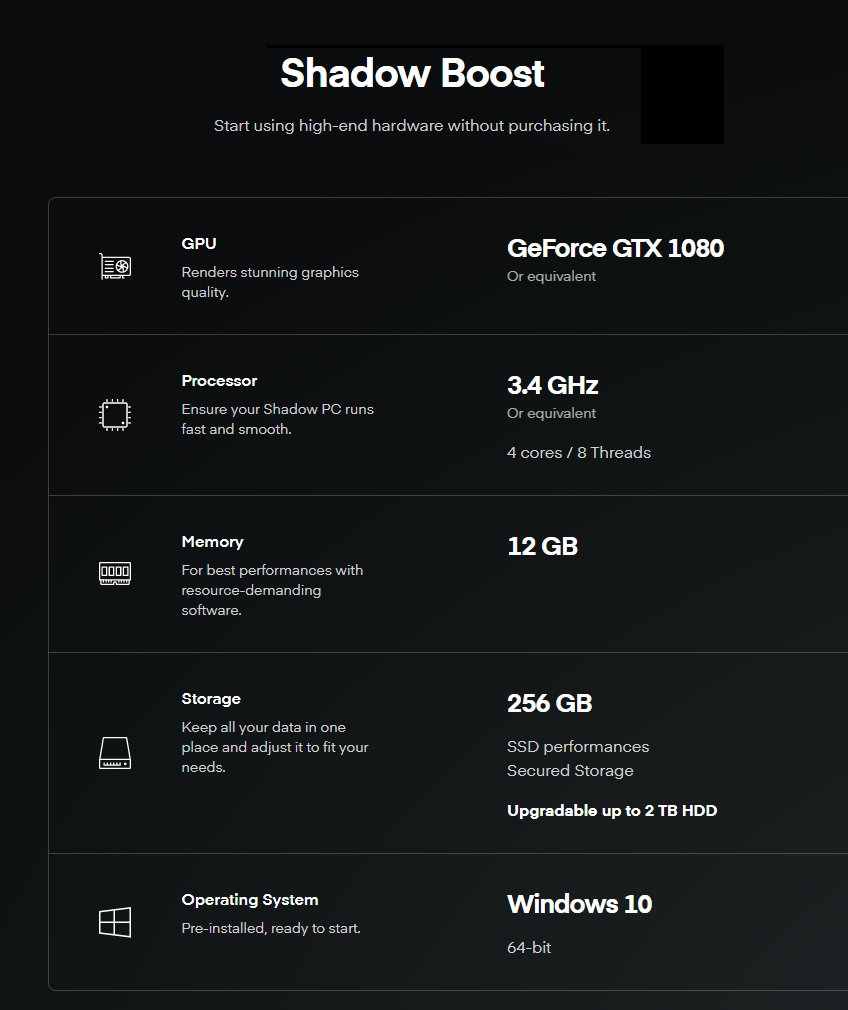 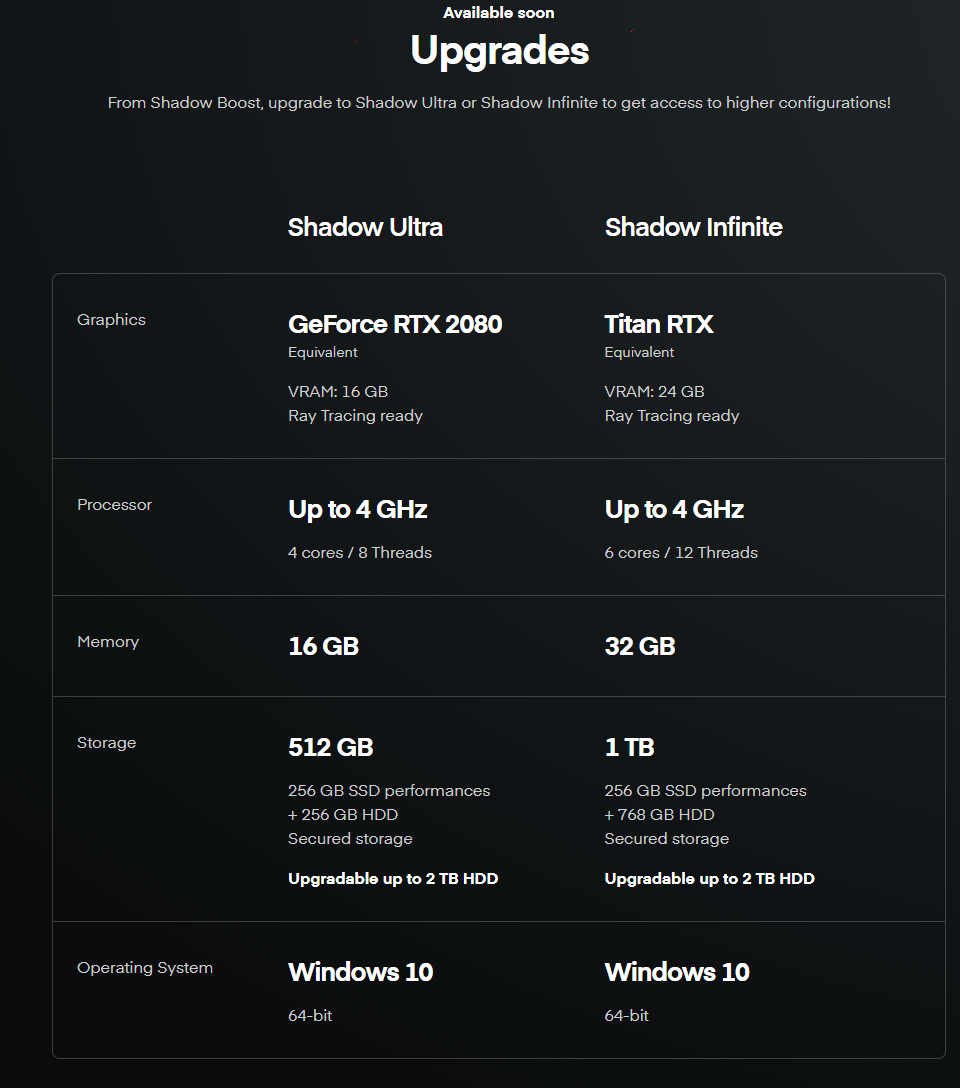 To sum up, based on the above system requirements for Lumion, Twinmotion, Enscape, and Keyshot, the robust servers for single-GPU rendering are absolutely necessary to avoid crashing, out of memory, and so on. While AWS offers a wide variety of GPUs at various price plans, but too difficult to use and seems to be not dedicated to individuals, Shadow offers at a much cheaper price, but the servers are only for small projects and high ability to crash due to low memory & outdated GPUs. It is clear that iRender farm is the most suitable and the best render farms for single-GPU render engines when meeting all system requirements of the aforementioned render engines with cutting-edge GPUs and offer customers at such a reasonable price.